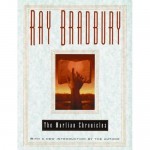 The Martian Chronicles by Ray Bradbury

Rating: Recommended
Buy this from Amazon.com

I’ve loved Bradbury since I was a a young teen. Often, the stuff you loved at that age doesn’t hold up on re-reading. You look back on many youthful enthusiasms with a mix of nostalgia and embarrassment. So I’m pleased to report that this classic still worked for someone a good deal older and less wide-eyed than the kid who read this book back in… well, a long time ago.

This isn’t so much a novel as a cohesive short story collection that spans man’s colonization of Mars from first landing onward. You can read it alongside the brilliant Fahrenheit 451, in which we get to see some of the events in this book from an Earth-bound perspective.Bradbury has written poetry, though I’ve never found it very palatable stuff. Which is odd, considering the sheer poetry of the language he uses in his stories. Rocket Summer, a story I don’t really remember from my original reading, is particularly beautiful, a meditation on an Ohio winter briefly made summer by a rocket launch. Another beautiful vignette that struck me both then and now is The Green Morning, in which a Martian Johnny Appleseed wakes to find his efforts rewarded beyond his dreams.

There are also some classic horror tales here. Mars is Heaven and Usher II stand beautifully on their own but have more resonance as part of the greater whole this book provides. Usher II also ties the book in with Fahrenheit 451. It’s also a real treat for Poe fans.

There is also Way In the Middle of the Air, a study of racism in 1950s America. African Americans migrating en masse to Mars deeply upset the racists who despise them. After all, when you define yourself by your hatreds, you’re nothing without the object of your hate. It walks a fine line, and I think it does so successfully. Yes, it’s written by a white man from small-town America, but he doesn’t fall into the deadly “magical Negro” trap. This story has been pulled from certain editions of the book, so find a copy that includes this one.

Near the end you’ll find the haunting There Will Come Soft Rains. Bradbury uses Sara Teasdale’s poem about nature covering over evidence of humanity after a war. The circumstances of the poetry reading are chilling and stick with you for a long time.

“I will look forward to more photos of Mars. Number Seven, coming up hopefully, will read, in large canal letters across the whole surface of the Red Planet: Bradbury Was Right!” — Ray Bradbury

Bradbury wrote that when NASA was getting early exploration photos of the red planet. Sadly, it doesn’t look as if he was right. But of all the fictional planets Mars (from Wells to Burroughs and beyond), Bradbury’s is the Mars I’d most like to visit. His visions of abandoned fragile cities left by gentle, golden eyed inhabitants stuck with me for decades. And rereading  this book has recharged those beautiful dreams.