Rating: Try It, You’ll Like It
Visit the Comic

I was sad that John Allison decided to bring his long-running Scary Go Round to a close. But I was delighted to discover that his new strip, Bad Machinery, is every bit as charming. Not only that, it contains some of the characters from the original strip, along with a group of great new characters. 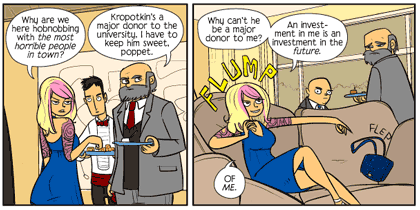 I think you’ll have no trouble getting into Bad Machinery, though the longer you read it, the more rewarding it is. You can enjoy individual strips for their little touches and witty dialogue, but it works better when you get to know everyone and their bizarre situations.

Allison took a big chance with the change from Scary Go Round. He’d built a cast of eccentric and appealing characters and thrown them into all sorts of madness. Camping holidays in Wales interrupted by bears, a journey to Atlantis that breaks the prime directive (a little Star Trek reference there), wars between charity shops and antique shops, and more. You really have to read it to believe it. A great comedy strip with great characters.

Bad Machinery takes place in the same fictional Yorkshire town of Tackleford, England. We’ve jumped forward several years, and though we see some of the Scary Go Round cast in the new roles time has cast them in, the main characters are school children. They’re shaping up into a very appealing cast, and the idea of  pitting two groups of wannabe detectives/problem solvers against one another is very promising. The main cast seem very carefully placed on that cusp between fearing and fancying the opposite sex, which seems the very best place to stage a battle of the sexes.

The general haplessness of these kids is also wonderful, and wonderfully believable. While the situations might become surreal, there’s something very believable when two of the girls are locked in a shed and don’t have a phone on them because it’s “for emergencies.” 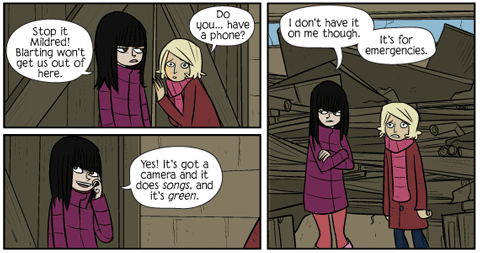 Like Hex Libris this is a story comic, so if you follow my strip, you might really enjoy this one. Please, just don’t enjoy it so much that you leave me for it. You can see other comics, just please come back to me.